Christ and His Ministry the Fulfillment of Daniel 70 Weeks

- February 07, 2013
Daniel's 70 weeks is distorted by those who wish to use the prophesy to postpone the other prophesies of the Old Testament and the New Testament. The anti Christ becomes a future man in the false Dispensationalist teaching. The battle of Armageddon becomes a future event rather than continuing prophesy being fulfilled through the behavior of the continuing Roman Empire (the Anglo American Empire) as explained at www.newcovenanttheology.com/2013/02/gog-and-magog-explained.html.

The establishment of the New and Spiritual Israel is perverted by Dispensationalism and becomes a future literal Israel instead of the glory of the present invisible and sparsely populated church. Israel is a sign, not a holy nation. Luke 21:24 All these Dispensationalist perversions are aimed to lead the non elect to their destruction. Here is the truth about the 70 weeks of Daniel:

The prophecy in Daniel 9:24-26 is a very important prophecy. This prophecy was given so that the Jews and the Gentiles would know the Messiah.

"Seventy weeks are determined For your people and for your holy city, to finish the transgression, to make an end of sins, to make reconciliation for iniquity, to bring in everlasting righteousness, to seal up vision and prophecy, And to anoint the Most Holy. Know therefore and understand, that from the going forth of the command to restore and build Jerusalem, until Messiah the Prince, there shall be seven weeks and sixty-two weeks; The street shall be built again, and the wall, even in troublesome times. And after the sixty-two weeks, Messiah shall be cut off, but not for Himself; And the people of the prince who is to come shall destroy the city and the sanctuary. The end of it shall be with a flood, And till the end of the war desolations are determined.'"

Daniel said in 9:25: "Know therefore and understand, that from the going forth of the command to restore and build Jerusalem, until Messiah the Prince, there shall be seven weeks and sixty-two weeks; the street shall be built again, and the wall, even in troublesome times." Since the Babylonian calendar was a 360 day calendar, this figure is an amazing fulfillment of prophesy.
Even the Gregorian calendar gives the same number of days. Using a 365 day calendar a total of 476 years divided by four (a leap year every four years) gives 119 additional days. However, three days must be subtracted from 119 because centennial years are not leap years, though every 400th year is a leap year. So then 173,740 days + 116 days equals 173,880!
Of course the teaching that the extra week, the 70th week is postponed is a dispensationalist teaching that denies the understanding of scripture. It is most likely that Jesus confirmed the covenant, ie preached for 3 and 1/2 years, then the gospel went to the Jews for 3 and 1/2 years, and then went to the Gentiles as well. That was the fulfillment of the 70 weeks of Daniel.
And of course in 70 AD the temple was destroyed fulfilling the prophecy that the prophets and Jesus made regarding the destruction of Jerusalem, the great tribulation, and the fulfillment of all things, except, of course, the continuing fulfillment of war waged on the elect by Gog and Magog and of course, Christ's Second Coming (no secret rapture).

So, to recap, the prophets were on the same page and the prophecies concerning Christ came true:


173,880 days is the exact number of days from the rebuilding of Jerusalem to Christ entering Jerusalem in triumph on the donkey as prophesied by the prophet centuries earlier. The donkey is spoken of by Zechariah as well:

Zechariah 9:9 New International Version (NIV)
The Coming of Zion’s King
9 Rejoice greatly, Daughter Zion!
Shout, Daughter Jerusalem!
See, your king comes to you,
righteous and victorious,
lowly and riding on a donkey,
on a colt, the foal of a donkey

Two prophets centuries earlier, Daniel and Zechariah, prophesied about Christ independently, and they support each other, both prophesies came true.

Other prophesies came true as well:

Here is a timeline that is slightly different. The beginning date is 457 bc not 445. It is not correct, not correct, because it does not put the end of the 69 weeks at the arrival of Christ into Jerusalem on the donkey! 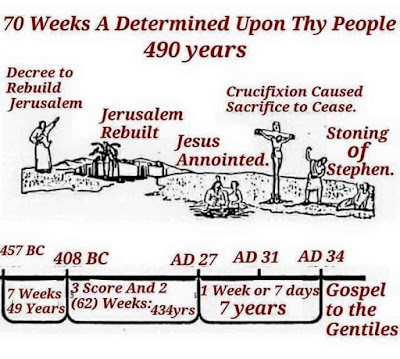 And yet the non elect cannot believe, even knowing these facts. It is all of grace, my friends.

The Man of Perdition; Titus

Summary of Gospel and Christian Doctrine

- June 15, 2020
This list of crucial Christian doctrine is not every crucial doctrine but is enough to separate the believer from the false churches.  Three pillars of Christian doctrine:  1. Christ is God along with the Father and Spirit. Christ's righteousness is God's gift to those saved. 2. The law of Moses cannot save people. Only the gospel can save. The law of Moses is external to the heart. It is good, but acts as a curse on mankind as only Jesus could keep it. The gospel of faith in Jesus comes from above. 3. The true Christian is saved by predestination, not at all by free will. No one believes unless drawn to Christ. -----‐---------------------- Preserve the blessing in Christ: A. Flee the Denominations. Flee Sacralist religion. B. Flee all cults that seek to control your lives as well, fellow believers!  C. Flee those who teach Christ was begotten in heaven. He was only begotten on earth, being called the Son after He was born and then begotten at the Resurrection. Christ was the
Read more

- May 05, 2013
The human mind cannot always take in the sobering reality of predestination. We who are predestined are grateful, but sorrowful. We know many we love are not so predestined. It hurts. Paul said he could wish that he would suffer if his kinsmen would be saved. But it is also that same Apostle Paul who told the truth in Romans chapter 9, that some vessels were created for special use, like fancy kitchenware, and others were created for menial use, to be thrown away. The truth is, sin is created by those who are not kept from it. The devil and Adam created sin in their acts of defiance, having been permitted to have a will apart from the will of God. They used that will to create sin. It is always that way. Only God is good, and only His Will is sinless. So then, there are a few predestined to heaven, through God given faith. And there are many, including many who believed in predestination like Calvin and the Protestants, who are predestined to hell. They were created for menial
Read more

- August 26, 2021
The Word was with God in John 1. He was God, too. The Word was then physically begotten as Jesus Christ, through Mary.  And finally, Jesus was spiritually begotten through the resurrection in Acts 13:33-36. He was then glorified. John 17:5. So the sacralist idea that the Word was eternally begotten is false religion. Flee the Catholics and Protestants who support the Nicene Creed. It is completely false religion. Flee eternal generation! But hold fast to 3 persons one God which originates in scripture. Few are saved. Follow their truth.
Read more