Showing posts from October, 2016
Show all

- October 30, 2016
This was first published at my blog: http://www.examplesofglobalization.com/2016/10/donald-trump-is-classic-cult-leader.html Donald Trump is a cult leader, classic in his tactics and beliefs. While not all of Trump's supporters will vote for him because he is a cult leader, a large majority will. Some of Donald Trump's supporters will vote for him as a protest against the status quo. They will do so even though protectionism may prove to be worse for the economy than globalist trade. I am no fan of the darker side of globalization, the extension of empire to establish world domination, and I have written books on the subject. But, free trade among equal nations in respect for each other is a noble goal  that is not often realized.  We can be certain, however, that Donald Trump wants an American empire that is even more oppressive to the world than we already have. And Donald Trump is a cult leader. He said so  when he said: I could stand in the middle of 5th Avenue and sh
Post a Comment
Read more 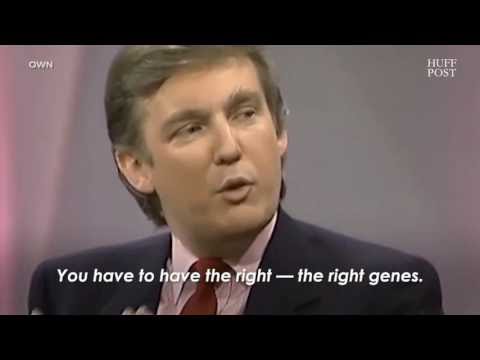 1. God hates the master race concept. Christians believe that Satan works among all leaders of the physical nations. However, the doctrine that is most Satanic is the one that proposes there is a master race. Donald Trump believes he is part of a master race, that he has the master race gene, through possessing German Blood. This is pure Satan. If you vote for Satan, it is your right, but you are putting the nation in grave danger.  So Trump said from the video: A. He has a certain gene.  B. He has a winning gene. C. He has German Blood. D. He has the right genes. (Others must have the wrong genes.) If you put the three of these statements together, along with a statement from his exwife that he kept a copy of Hitler's Mein Kampf on his nightstand, there is no other conclusion than he believes he has the master race gene. There is no other possible conclusion. From Wikipedia: ...The ideology of Nazism was based upon the conception of the Aryan race or
Post a Comment
Read more
More posts