Showing posts from July, 2020
Show all

The Deity of Christ

- July 26, 2020
Some who deny that Jesus is God make the claim that Jesus never said that He is God. It is correct that the Bible never records Jesus saying the precise words, “I am God.” This does not mean, however, that Jesus never claimed to be God. And others claimed He is God. In Revelation 21:22, we see that the Lamb is, along with God almighty, the temple of the spiritual Jerusalem. You don't get to be the temple without being God. Believers share in the temple as Peter teaches. But the temple is the Almighty and the Lamb who is also fully God.  Is Jesus God? — Jesus claimed to be God. Take for example the words of Jesus in John 10:30, “I and the Father are one.” We need only to look at the Jews’ reaction to His statement to know He was claiming to be God. They tried to stone Him for this very reason: “You, a mere man, claim to be God” (John 10:33, emphasis added). The Jews understood exactly what Jesus was claiming—deity. When Jesus declared, “I and the Father are one,” He was saying
Post a Comment
Read more

Sarah Is the New Covenant

- July 25, 2020
Sarah represents the New Covenant and Hagar the Old Covenant according to the Apostle Paul in Galatians 4:21-31 which is an example of children of promise. (This is just one fulfillment of Genesis 22:16-18.) The lesson destroys the idea of Covenant Theology, which teaches that both Covenants are the same. They are not. This means that both Jew and Gentile are included in the New Covenant including the Galatians who are children of the spiritual covenant along with the elect Jews. The children who are legalists and reject the New Covenant are from Hagar! She represents the Old Covenant. Any translation captures this. This happens to be the NIV. Galatians 4:21-31 New International Version Hagar and Sarah 21  Tell me, you who want to be under the law, ( A )  are you not aware of what the law says?   22  For it is written that Abraham had two sons, one by the slave woman ( B )  and the other by the free woman. ( C )   23  His son by the slave woman was born accord
Post a Comment
Read more

The Man of Perdition; Titus

- July 17, 2020
I reject as doctrine from Hell the idea that the Second Coming of Christ has passed. The Full Preterists hold to that soul destroying doctrine. Some would label me a partial Preterist, meaning that for me, most was fulfilled in 70 AD, but not everything. Romans 11 coupled with Luke 21:24 is just now being fulfilled. And Christ's Second Coming is future but soon. Come Lord Jesus! --------------------------------------------- The following is not a test of faith. But I have always said that 70 AD fulfilled 2 Thess. chapter 2. I have always said that the beasts and especially the ones who abused the woman, Israel, were Caezars. Certainly Nero, whose head was injured, (he died by cutting his throat), was the wounded beast, and the three that followed, Vespasian, and his son Titus and Domitian did persecute the early church and they destroyed ancient Israel. It was God's will, but the evil that it took was assigned to these emperors of the Flavian dynesty.   Titus Destroys th
Post a Comment
Read more

The Idiocy of Messianic Judaism

- July 13, 2020
Messianic Judaism is a mess. It is hypocritical. It is false religion! Here are just a few points that back up my view: 1. The Messianic Jews deny predestination. (Ephesians 1 and 2. Romans 9.) Free will is not the path God uses to save His chosen in Christ. Free will has no power. It is not of him who wills or runs. 2. The Messianic Jews tell others they have to keep the law (Torah) of Moses but flee to Christ for forgiveness. That is outrageous. (Galatians 3:11, Romans 3:28). You cannot rest in Christ and keep the Old Covenant law at the same time. The entire letter of Galatians refutes that dual track. There is only one way. Christ! 3. The Messianic Jews think both covenants are the same, just like Calvin and the other Covenant Theologians. That doctrine alone condemns them! The Old Covenant was abolished. (Heb 8:13). 4. The Messianic Jews do not acknowledge that Christ is on the throne of David right now, and that the holy nation is believers only. No future Israeli h
Post a Comment
Read more 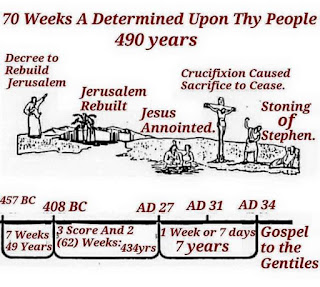 I have been told this meme is Adventist. But this timeline of Daniel is incorrect. It attempts to be correct as there is no postponement 70th week, just to fit a legalistic Dispensational system. Dispensationalism is garbage and bondage! However, the following meme is likely very incorrect. The accurate start date should be 445 BC according to Nehemiah chapter 2. Here is the incorrect meme with the incorrect start date of 457 BC. It is likely the start date for the restoration of Israel is 445 BC, not 457 BC. See the first link below. 445 is necessary to bring us to Christ's entrance to Jerusalem which was 32 AD. He was cut off after 69 weeks, not after 70 weeks as the meme teaches. We see Christ as the fulfillment of the prophesy. We see Israel's time runs out with the stoning of Stephen according to the meme. But this is incorrect, as Paul turned away from the Jews to the Gentiles much later. Acts 13 Then the gospel goes to the Gentiles for 2000 years, and then back
Post a Comment
Read more
More posts